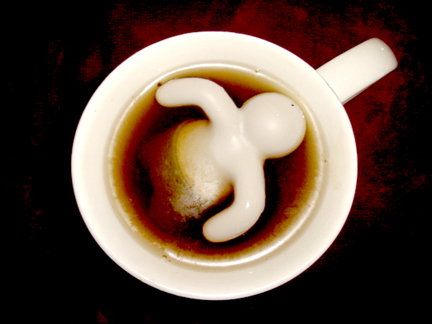 This, is how I found him.
Floating face down in my cup.
If I told him once, I’ve told him a gazillion times
DO NOT LET GO OF THE EDGE OF THE CUP!!! 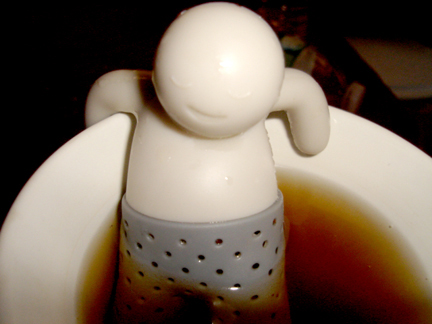 We spent many a happy day together.
Those, are what I shall remember. *deep sigh of anamnesis*

'Yes, we were in a relationship.
He and I.
We met at Kitchen Kapers.
It was love at first sight,
though I eventually came to believe it was one-sided.
He, with that winsome smile and sleepy eyes,
how could I resist?
But all that, matters not.
He gave me warmth.
He gave me comfort.
He gave me.....tea.'

Secondly (obviously, there generally is after a firstly), a police inquiry.....

My alibi:
Police Detective: ‘Where were you at the time of the ‘incident', *glances at report* Ms. Justine, is it?’
Me: *nods affirmation of name*‘ ‘As I told the officer who first arrived at the scene, I had left his side for only a few minutes. When I returned to the kitchen, that is how I found him.’
Police Detective: ‘Did you try resuscitation?’
Me: ‘Of course, but to no avail, so dialed 911.’
Police Detective: ‘Was anyone else in the house at the time? Can you verify your whereabouts?’
‘You understand, we must ask, to rule out homicide....or suicide.’
Me: ‘Yes, I understand, and no, there was no one else in the house at the time, that I am aware of.’
Police Detective: ‘We were told you recently had a ‘heated’ argument with the deceased? Is this so?’
Me: ‘It was not an argument, it was merely a statement. Sure, sometimes ‘bits’ would escape his trousers and I’d find it floating in my cup. I simply questioned him concerning this. He got all ‘steamed’, and said I was accusing him of doing it on purpose, because it was the tea I loved and not really him.’
Police Detective: ‘And did you believe he was doing this on purpose?’
Me: ‘Not really. I don’t think he had much control over what went on in his trousers, sir.’
Police Detective: ‘We were informed by the kettle, that you made a threat?
Me: ‘All I said was, if it continued, I might resort to teabags. *tears beginning to well* I didn’t mean it, *sob* teabagging could never replace him.’
Police Detective ‘Sorry for upsetting you, Miss, but it is necessary.’ *paused with consideration while I regained composure, then continued* ‘Do you know if anyone harboured a grudge against the deceased?’
Me: ‘No. At least I don’t think so.’ *wiping tears from eyes*
Police Detective: ‘Very well. There will be no further questions at this time. We will contact you if more information is required, and, please, if you think of anything else you might have missed do not hesitate to contact us.’ 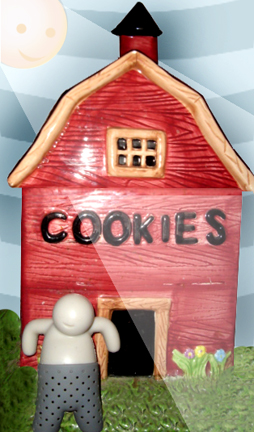 He grew up on a farm
‘Plätzchen Farm’, the Teamann homestead.
It was a cookie farm, his family being
biscuit farmers from way back. In the old country.
Oh, you didn’t know?
Most cookies grow ON trees, not produced IN them, like
some elves would lead you to believe.
Fig Newtons, for example.
And some, like Peanut Butter cookies, grow underground.
They also raised a few animal crackers, on the farm.
After all, they were tea people, and what goes better with tea than cookies?
Anyway, it was an idyllic setting, as you can see
from the photos.
Yes, the sun always smiled brightly on Plätzchen Farm
It was the American dream, in fact.  Even the sky
rippled it’s clouds to appear like the Nation’s flag.
Mhmm *affirmative nodding*
He told me that he would take me there, someday.
But ‘someday’ rarely ever happens.  Now he is gone.
*Stifles back tears* I’m sorry, I just can’t go on right now.
It is too soon.  My grief is still fresh.....
*uncontrollable sobbing* 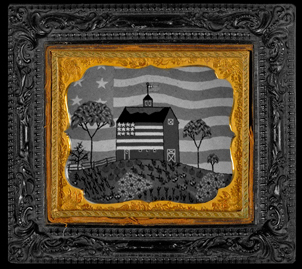 I felt unbearable guilt for not being able to save him.
If I had only entered the kitchen a few minutes earlier....just a few minutes.
It preyed on my mind. I didn’t want to accept the possibility of suici....no, I won’t believe that, I can’t believe that. We were happy, weren’t we? It was an accident, only an accident.
I’ve been trying so long to convince myself of that.

With a deep sigh I arose and proceeded to the kitchen.
Tea used to ease my worries. It’s warming comfort, that aromatic scent, calmed my senses.
He knew that, and was always there, pants down, waiting to indulge me, whetting my anticipation. 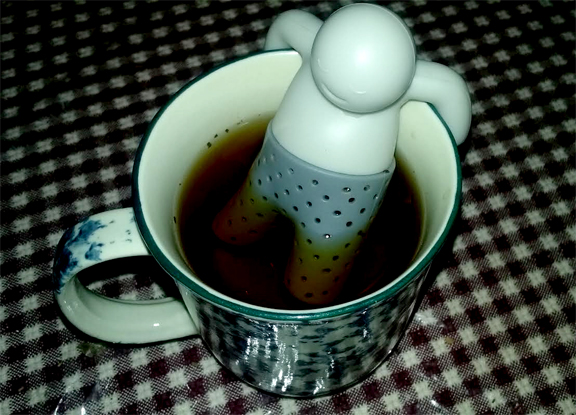 (What is this new turn of events? A figment of the imagination? Some spectre, having found a way to cross the Veil? Angel.......*dumdumdummmmm* or demon?
​So many questions begging to be resolved. Stay tuned for the next steamy episode, 'One Brew Over the Cuckoo's Nest' or 'Oolong Day's Journey into Night')

To be continued.
'The tea extends life. The tea expands consciousness...the tea has mutated over four-thousand years, use the orange pekoe, which gives the ability to fold space...
​yet, can it return to me my lost love?'