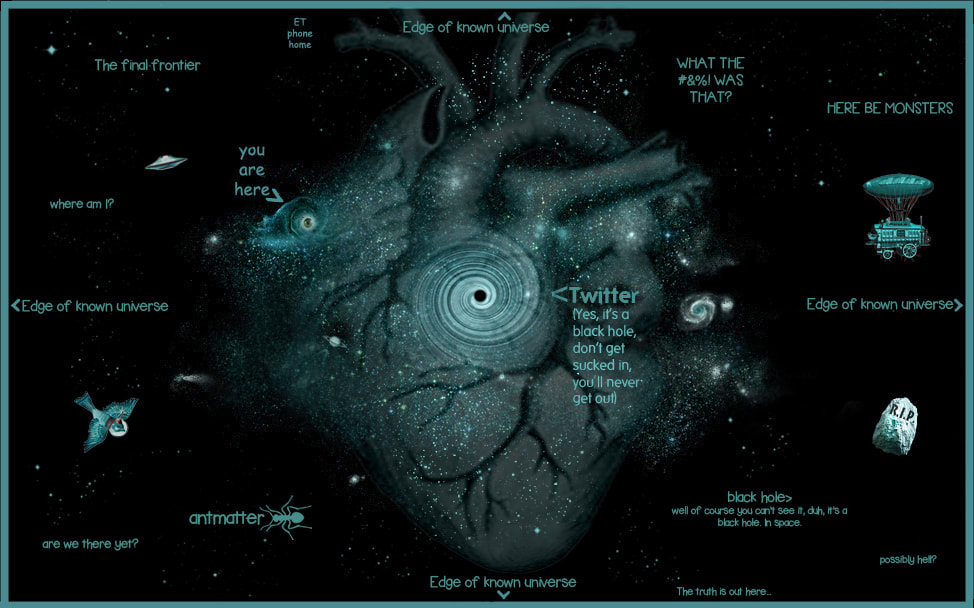 *Click on star map above for larger image
(sure, it's busy, but so is Space. Everything stretching, turning, churning, whizzing about, it never rests.)

Was able to escape Twitter before reaching it's event whorizon.
​Created 'Chirp' here, instead.
​Nope, was not able to resist the gravitational pull of Twitter. Struggling at the edge on
​Planet Crouton!
BellGab no longer exists. Swept into a black hole, no doubt. It was a fun and informative forum dedicated to Art Bell.
Been a few other places, done a few things, had a couple of internet persona...
Mara Fantoccini, Puppe Seelenlos, Mara Puipeid <(and even though it does appear as if it would be pronounced 'poopy-head', I do not think it is, it does however begin with a PU....hmmm, just noticed that. I could be wrong about the pronunciation though. I am wrong about a lot of things. Hopefully, this is one), Therese (de Bertole), Hugh Oldfartz, Nichtdasein, Idun, Ysbryd Tragwyddol, Space Sparrow/Sparrow in Space, The Green Sparrow. All were eventually embodied in just\Sparrow. It was getting rather tight inside.
(Many were at the now defunct Steampunk Empire. Some were also used in entries at DWM's Queen Bran's Revenge RP [see below].)
Sparrowraith (GOG).
​Just Justine at DWM (repeat), most as part of the Queen Bran's Revenge, and  the HMS Felicia RPs there.
Also as: Gwyn Thrilaquest, Phyllis Pharaday and Datura Senkora at the still active Welcome to Steampunk.