Yeah, I was going to call it Confuciosophy, but he was so muchly wiser, and not confused, like I am about most things.
Then, I was going to call it Philosophisms, but that's actually a word!  Who knew, right?  The definition of it is 'spurious or deceitful philosophy; a false or contrived argument, especially one designed to deceive', which none of
this is.  These are just thoughts of mine (you know, how that light bulb goes off in your head and you suddenly think you understand something) made into some form of confused philosophy (confused + philosophy= confusiosophy, pronounced con-fuse-e-osophy. Mhmm. *nodding affirmatively* :)
And, yes, they are all stated affirmatively, and are, at least at that particular moment of deluded enlightenment.
Today's confusiosophy, well, there are actually two-
#1.  'If in seeking, ye shall find...then ignorance is surely bliss.'
and
#2.  'If there is no chance of escape, pretend.'

You see, I told you they were confusing and not very wise...except in my head.  I understand them completely.
K, more will follow, as I think them up. :)

The next is a serious one, so listen up.
#3.  'Learn not to love.  Life is much simpler that way.'
#4.  All this about ‘turning the other cheek’, what happens when you’ve used up all 4?
is that when you start slapping the other person’s cheeks?

#5.  One learns, at an early age, from the playground to the grave, that nothing is fair.

#6.  Like Lennie Small, sometimes we unintentionally destroy that which we love most.

#7.  To err, is human.
To forgive, devine.
Pferd-Scheiße!...except for the first part.
There is no such thing as forgiveness,
ask any German!
(and I want to make this clear, I am not antisemitic, I'm just trying to make a point.  Humankind <[and take note, I do not like saying 'Mankind', why put the blame on one gender, we're all in this world equally together and it's about time we realize it] as a whole, has never been very 'humane'.)

#8.  If you dare march to the beat of a different drum, you end up having to pay the piper.
*deep sigh* and *deeper sigh* again.

#9.  And, lo, the Lord sayeth unto them 'Doeth as I say, don't doeth as I do'.
Verily, the Lord works in mysterious ways. Verily muchly so.
(All of the above are my own opinions, and are not to be mistaken for actual biblical and/or literary text [give or              take a few words])

#10. It's not the words that matter so much as the motivation behind them.

#11. A sense of false happiness is better than no happiness at all.

#13. It always seems faster when returning home, than it was getting to
your destination. This holds true, especially so, if you took the short-cut back.


#14. Someone said to me ‘sometimes a cigar is just a cigar’
I responded, 'but maybe it’s a weapon, though, in the hands of an arsonist’?
Life is all about interpretation.
#15.  And god said 'let thy buns not equal thy hotdogs!' and it was so.
Yeah, he/she/it likes messing with our heads like that.
And he/she/it is so darn hard to please! From, like, day 6 or maybe day 6 million or whatever, always wanting             tributes of meat instead of veggies and stuff.  That might explain the hotdogs.
Then there's the 'do as I say, don't do as I do', as mentioned previously-
'Thou shalt not kill, but I can wipe out entire towns and, in fact, all of my most beloved creations except for
Noah, family and whatever animals he could collect.'  That's rather harsh punishment, but then look at what he           did to his only begotten son.  Guess it explains tough love?  Wait, or was that actually him reincarnate?  So               was it was self sacrifice?  I don't get that trinity thing, wouldn't that make him his own father, too?  He fathered
himself, or was it just a clone?  And if he, since apparently this has cleared things up as to his gender, was all
three, then he is only one, right?  Just God.
And back to the beginning, and the  'Don't eat fruit from that tree.'  Who is the tempter there?  Everyone knows
telling a curious child 'don't' immediately makes them, well, curious.
What did he expect, he created us in his image, for his sakes!
Maybe it was all propaganda and disinformation given by Satan!?!
I'm confused.
If you find a qualm with any of this, remember, 'judge not, less ye be judged!' :p
#16.  The internet (other than for business or information) is nothing more than a virtual amusement park.
Or maybe it's just another level/circle of Hell, created to lure us away from real life contact.
#16.  Being a control freak without having any control whatsoever is unproductive.
And depressingly frustrating.  Hear ye!  Hear me!
#17.  I close my eyes, hoping, when I open them, I will see more clearly. but I see with my heart instead of my eyes,         and hearts are blind.
#18.  There are endings.

#19.  Life is fragile but persistent and won't give up easily without a struggle.

#20.  Steganography-  The secretive writings and/or possible biography of a Stegosaurus. Yes, they are very sneaky.

#22.  The only 'happily forever afters' are in fairy tales.

#24.  Love hurts too much.  Physical pain is far easier to deal with than the emotional kind.
Both still let's you know your alive, at least.

#25.  There will always be someone to replace you no matter what.

#26.  The majority of us will be forgotten, even in our own lifetime.

#27.  Loneliness is worse than being alone.  It's being alone even in a crowd.

(You) C  Truth is, the happiness/satisfaction of the many outweighs that of the few or one.
Whether right or wrong, placate the majority at all costs, for the one does not make a riotous mob, just a
noisy nutter.

E(nough)  The more I visit social sites (i.e. FB/Twit/forums), I realize why the world is as it is.
It's really an awakening. I think I liked it better when I was naive and reclusive.
I was happier, proving ignorance is bliss, and what you imagine can be so much better
than what actually is.

F You see, life is all about an individual's perception.  Each has their own.  Sometimes they are similar
and sometimes not.  It's a 'whisper down the lane' type thing.

G(zus).  Our brain, that symbiotic infiltrator, is always trying to confuse and delude us!


Hey!  Physically we are genderized (except perhaps for a small percentage.)  Spiritually, our souls are androgynous.


I(say).  It seems we've become nothing more than pawns of the economy. We are the masters (though we fail to see it) and the slaves.  We are the producers, as well as the audience buying tickets.
It's all about profit.  We work, earn, then spend, lining other's pockets, leaving
little time for ourselves.  Guess that's how it's always been since we became civilized
and domesticated.


J(aded). Dedication and devotion are myths, and only meaningful to fools.
People use people.  When their usefulness runs out, and they are no longer needed
or cease to serve some purpose or interest, one simply moves on to others.
And there are always others to move on to. It is seen more clearly on the internet
Guess it's the transience of human nature. After all, our time on this planet is limited.


L  is for learning to fly (if you want to survive the fall), which you must learn to do on your own, alone, but then,         humans are always alone inside, which is really quite sad, and the reason we try so hard to reach out to others
Anyway, when/if you do learn to fly, you never have to worry about nets (inter or otherwise) again.


L2 Not 2 as in 'level' but as in 'the power of,' yes, love. To love (and to be loved) is the most important
thing there is....guess I'm just a hopeless romantic.
Anyway, The following are not quotes of mine, but I find them meaningful-

‘Anyone who falls in love is searching for the missing pieces of themselves. So anyone who’s in love gets sad when they think of their lover. It’s like stepping back inside a room you have fond memories of, one you haven’t seen in a long time.’
-Haruki Murakami

‘Love is a temporary madness, it erupts like volcanoes and then subsides. And when it subsides, you have to make a decision. You have to work out whether your roots have so entwined together that it is inconceivable that you should ever part. Because this is what love is. Love is not breathlessness, it is not excitement, it is not the promulgation of promises of eternal passion, it is not the desire to mate every second minute of the day, it is not lying awake at night imagining that he is kissing every cranny of your body. No, don’t blush, I am telling you some truths. That is just being “in love”, which any fool can do. Love itself is what is left over when being in love has burned away, and this is both an art and a fortunate accident.’
-Louis de Bernières
M(aladjusted).  The internet is still like a playground and I remain sitting on a swing, alone,
watching the others playing merrily. I guess it’s because I never learned how
to play their game....
Occasionally I’ll scrawl something with a stick in the dirt, or stare up at the
sky and wish I could fly away, or wind up (the chains) and then spin,
out of control, blurring everything together in a whirl.
Sometimes I don’t know if I even want to stay, or just go back inside (myself) again.
N(onsubjective).   It's kind of a shame, if even just for one day, we couldn't be on the outside of ourselves and see and hear what we are like from that perspective.  How others perceive us.

O(K).  I do not believe in Karma.  There is no fairness.
Life is truly a roll of the dice.
Luck, being at/saying/doing the right thing at the right time plays a part, other than that it's all about the decisions/choices one makes, and what a person is willing to do to get what they want, as well as what they are willing to put up with.
P(romiscuously) Q(uaint) R(evenant) S(oul) just needed to use those letters so she could post this-
Tea is the solvation to all of life's problems (and yes, I meant solvation.) 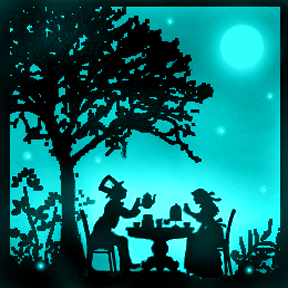 T is also for Transience
Never ever grow too attached to anystuffs or anythings or anyones,
because stuff gets lost and things break.  So do relationships.
You’re only setting yourself up, letting ‘feelings’ dictate and
tempt, only later to deceive you.
It’s life.
Life can be so very painful.

U are here.
Vive la Révolution!
Sadly, all ^they^ seem to do is replace one oppressor with another.
Seems most humans, no matter how good, can be corrupted by either manipulation, force, the power itself, gain and/or threats. If not, they become martyrs.
(hmm, one thing he said could perhaps replace Viagra :\)