Some of my craftiness :) 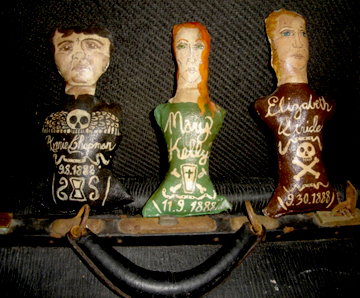 Here are my first attempts at making stump dolls.  They are three of the conical five victims of the infamous
Jack the Ripper.  They are, from left to right: Annie Chapman,  Mary Kelly and Elizabeth Stride (not in the order of
when they were murdered.)  I painted them by referencing the written descriptions of the women, as well as the
postmortem photos. I will try and put up better photos at a later date (maybe tomorrow.)  They are perched on
a very old medical bag, which I found at a junk shop.  It needs cleaning as the leather is all dried and the latches rusty.  The dolls are approximately 6 inches in height, and made of stuffed and gessoed canvas, then painted with acrylics, aged and sealed.  I still have the other two to make.  Maybe next I'll work on creating the suspects, too. 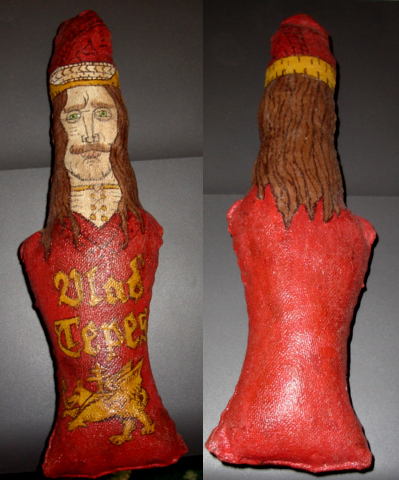 Here is the stump doll I made of Vlad Tepes, aka, Vlad Dracul (whom the character 'Dracula' is based upon) and Vlad the Impaler.  It is approximately the same size, and created the same as the Ripper victim dolls above.
A brief explanation:
‘Stump dolls’ were originally primarily made of wood.  They were basic, limbless dolls, that gave a rather abstract simple impression of a human.
These primitive dolls were popular in Europe during the 16th , and even into the 17th , centuries.
A surviving example (see pic below), held by the London Museum, dates from around 1600.  It is basically of a skittle shape, with somewhat detailed torso, wears a small wood ruff and has incised grooves in it's base (to indicate folds of her skirt.)
Fewer than thirty English stump dolls have survived.
(Japanese Kokeshi dolls are similar examples of stump dolls.) 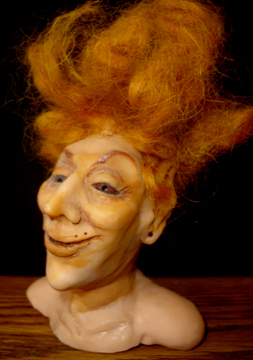 This is my version of Loki the 'Flamehaired'.  He is made of super sculpey.  He has holes where his lips were sewn shut-
Loki, out of mischief, cut off all the hair of Sif, the wife of Thor, while she slept.  To appease Thor’s anger, Loki swore he would get the black dwarves to make hair of gold for her, which would grow just the same as her natural hair.

He went to the dwarves that were called the sons of Ivallda. They first made the hair, which did grow. They also made the ship Skíðblaðnir, as a gift to Freyr, for which favorable winds always blew.  It could sail on air as well as water, hold all the gods and their mounts, and could be folded up very small for storage, then for Odin, they made the spear Gungnir, which never fails in its aim.
Loki was so pleased that he declared the sons of Ivald the most clever of smiths.
Two dwarf brothers, Brokk and Eitri, overheard this and wagered Loki that Eitri could make three items that surpassed those three.
Loki agreed to the wager, with the stakes being the loser's head.

While Brock tended the bellows, Loki turned himself into a fly to torment Brock, who nonetheless continued working.
Eitri created a boar with bristles of gold, the gold ring called Draupnir, and the hammer of Thor, Mjolnir.
Loki, thus, lost the wager, and the dwarves came to collect his head which had become rightfully theirs. Loki had no problem with giving up his head, but he insisted they had absolutely no right to take any part of his neck. Everyone concerned discussed the matter; certain parts were obviously head, and certain parts were obviously neck, but neither side could agree exactly where the one ended and the other began. As a result, Loki kept his head, although his lips were stitched shut as payback for getting out of the bet with tricky wordplay.After a time of silence, Loki managed to remove the stitching, and made plans for his revenge. 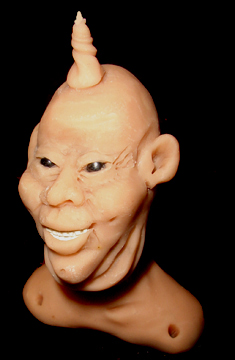 Also made of super sculpey, I call him a 'Eunuchorn'.  I have a story planned around him (if I ever finish it!)

Some more of the little creatures I create... 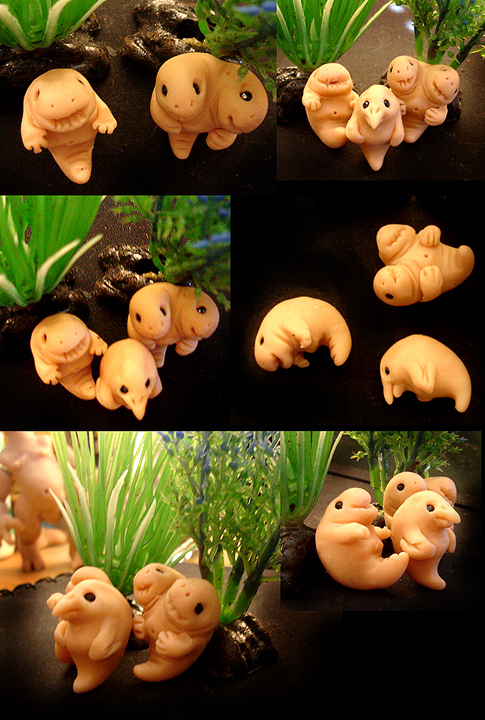 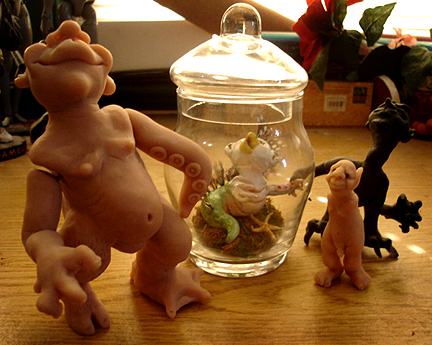 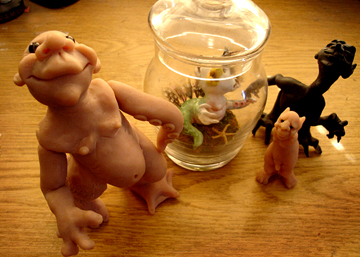 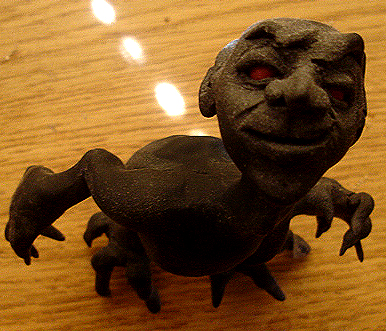 ...this guy has holes in his back, awaiting wings (which I obviously have not made yet).
When completed he will be caged!
Guess he's kinda gargoyle-ish. 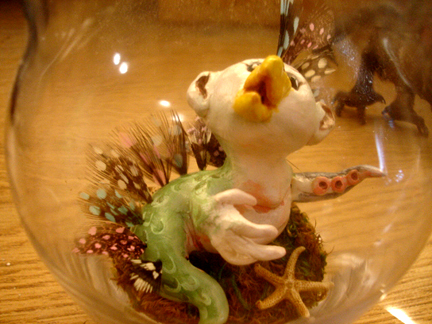 The following is my version of Vera the Mouse.  I like mice.  But they should wear clothes. They look cuter in clothes.  I haven't made any for Vera, because she's doesn't even have a body yet! 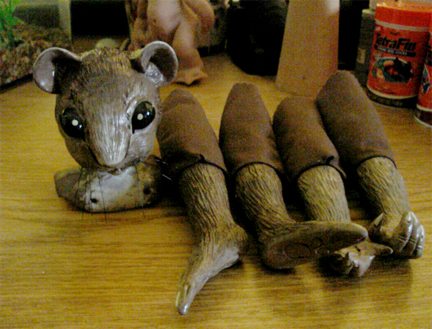 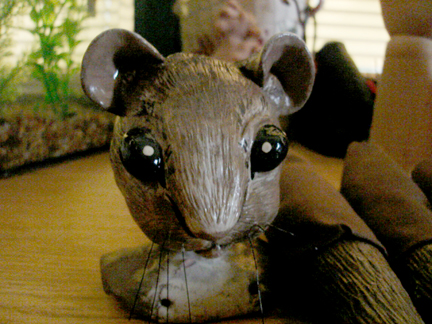 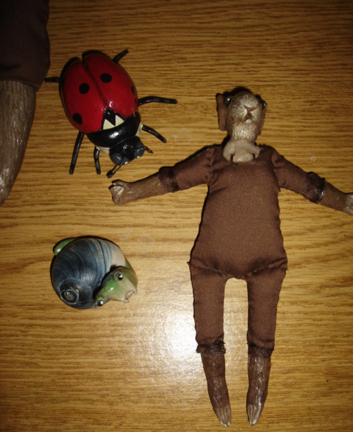 Vera's doll and two of her friends.  The snail (yeah, I like those, too) is made with a real shell.  I found it on the beach, it was empty.  I'll post better later when Vera is finished. 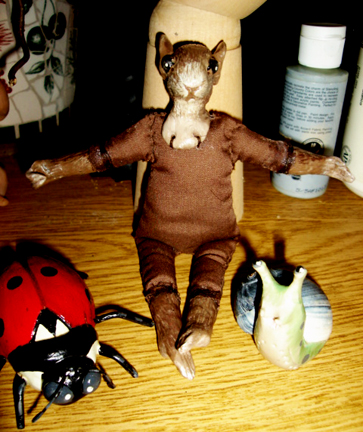 The following are some elf (or possibly demon) heads I made, and will hopefully eventually make posable bodies for them.  They are yet unpainted super sculpey. 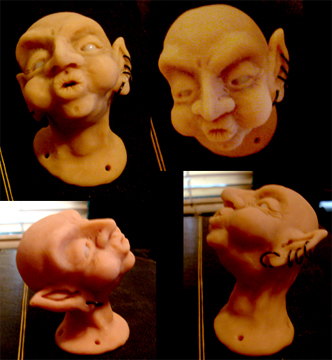 'Smiles' was in the oven a little too long.  It's ok, though, he can be lightly sanded then painted.

'Whispers' was over-baked along with 'Smiles'
Some will get hair and maybe even little beards or goatees. 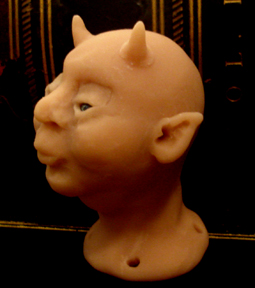 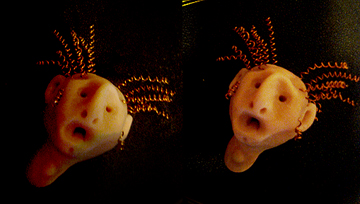 'Wired' is obviously not an elf, actually not quite sure what he is.
It was just an experiment. He has copper wire curls...or are they
antennae with which he picks up conversations, could be the reason
for his expression! 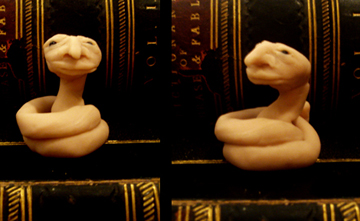 'Keeper of Books' is a worm librarian.  He is the sole guardian of pre-universe secret tomes.
Haven't thought of a proper name for him yet. 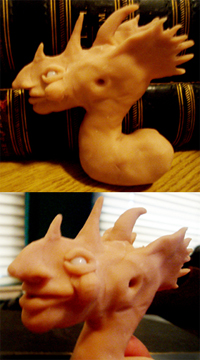 Lastly is 'Tricornius'
I generally don't have any plan, it all happens randomly,
I just start working the clay and let my imagination take it from there. 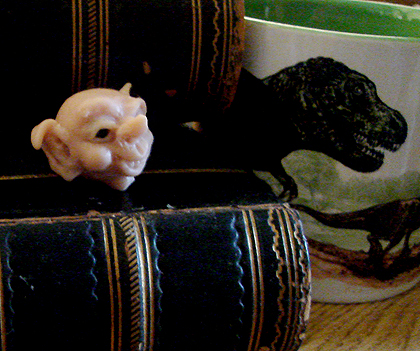 This is 'Squinch'.  I'll post a better picture of him later, he needs a neck (and body, I really have to start making them bodies!)
Anyways, that's my dinosaur extinction mug.  Right now, there is nothing in it, but when you put hot beverages in it, they turn into fossils!  Well, skeletons.  Pretty cool, huh?  Got it on clearance at Target.  Also got a global warming mug.  When you pour something hot into it, the oceans rise and coastlines disappear!  The comments on the box were funny (though it is a serious issue).  It says 'you've got the whole world in your hand...and it's sinking', also 'Bye, bye, Belgium' and 'Whoa! Where's Florida!'  :)
K, done now.